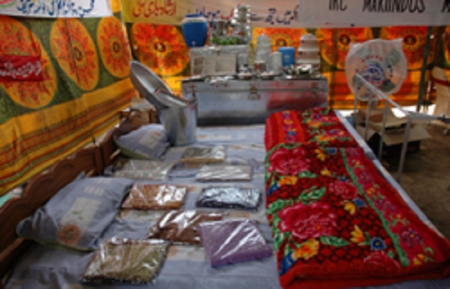 TAUNSA SHARIF:Sixteen couples, belonging to the downtrodden classes of Shia and Sunni sects, tied the knot at a mass marriage at seminary Babul Qum on Thursday.

The wedding was arranged by the Imam Khomeini Welfare Trust Pakistan (IKWTP), and led by its chairman Allama Syed Iftikhar Hussein Naqvi, Federal Parliamentary Secretary Khawaja Muhammad Sheraz and dozens of dignitaries from both the sects. It was the first event in the history of Taunsa. Male and females were housed in separate tents while the reception committee had made efforts in decorating the marriage place.

The dowry items gifted to each newly wed couples were consisted of two beds, two chairs, one table, one showcase, one big box, one sewing machine, one ceiling fan, five dresses to each bride and five dresses to groom, two bed sheets and more than 32 items of kitchen, household and daily use.

The participants paid rich tributes to the Lebanese and the Palestinians and said they could not forget the ongoing bloodshed in Lebanon in their moments of patience and rejoice. Speaking on the occasion, Allama Iftikhar said that they were joining the couples with weeping hearts because of blood being shed in the streets of Lebanon.

“The tyrant Israel is going towards its self-destruction under the leadership of satanic Bush. The anti-Islam forces have united against the entire Muslim world, while Americans were going to invade them and implementing the idea of expansion of the Zionist state. The barbarians were targeting the innocent civilians amid criminal silence of Muslim countries,” he said.

He said the Hizbollah with the power of belief had been fighting against the devils for the survival of humanity, which needed an organised international Jihad movement against Zionism. “The present situation has exposed the so-called organisations of human rights for keeping their mouths shut at the killings of innocent people at the hands of the Zionists,” he added. He asked President Pervez Musharraf and the present regime to support Hizbollah, which is fighting a war of entire Muslim community.

Highlighting the importance of initiating mass marriages irrespective of religious difference, he said that the IKWTP had been striving hard to help the destitute including orphans and widows to give pleasures and happiness since its establishment in Mianwali in 1982.

He said that the poor could not wed their daughters due to financial constraints and they become overage at their parents’ home. He said that more 100 couples were joined in Muzaffarabad, Bagh, Mianwali and Dera Ismail Khan with the collaboration of philanthropists. He vowed to continue this mission to alleviate the miseries of the poor parents. He said that the people should come forward for the help of the poor without any sectarian or class or tribe discrimination.

More in this category: « COLLECTIVE MARRIAGES