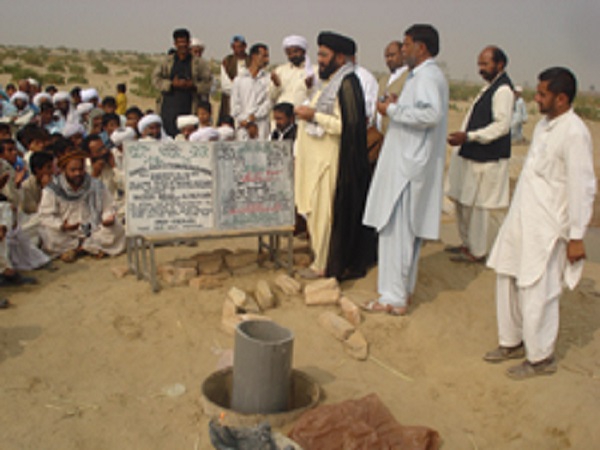 100% inhabitants are below poverty line. A donkey is more valuable than this barren land. The annual rainfall is about 100 – 125 mm which comes in a stormy way to form flash floods and they face devastating damages to their feeble muddy houses and cattle.

They live in family groups. The basic service utility is an unknown word with no water, no electricity and no dispensary. Only three Schools starved with teachers, furniture and anything else. 95% of the population never heard of schooling. The child and women are busy working as “water carrier” in the community

Water is inevitable for life, the nature’s most precious gift to all living beings. But here the only major task left is to strive for water and water. The “Lotus” is so starved! The females and children are forced to go daily for fetching water from dawn to dusk all year, roving daily about 20-25 km , whether to face hot sand or freezing wind biting their faces and feet, the real index of calamities and miseries. Yet the water brought is 0.0% pure and full of contaminations. Hence diseases are their permanent fate. Health FacilityDisease rate is 95% mostly of stomach, kidneys and lungs. When the survey team reached there one of the old women was dying as her appendix had been burst. Death rate of children is very high sorrowfully.

It is quite imperative to steer them out of this calamity. This can be done by making some efforts for water facilities near their dwellings. The water is at about 300-400 ft deep, which can be pumped up by powerful turbine-Generator. The cost of installation/maintenance is of the tune of Rs. 1.5 million (25000$ / 12000pounds) per unit. Each village will need one such plant. It will be unthinkable and unthinkable gift for them.They are looking for Moses to come forward with the bouquet of indescribable happiness. As it is not their fault to get birth at such a place just to be a “Thirsty Lotus” needing water. It means life and everlasting life for those who bestow lives to these needy ones. May God give us the strength to help those achieving rosy smiles to their faded faces.Please hurry in the service of mankind and your conscience will give you

Thank you bouquet.May God bless you and them (amen)Looking forward to your donationsSyed Iftikhar Hussain Naqvi 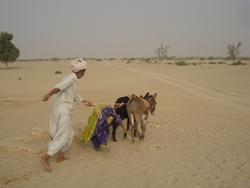 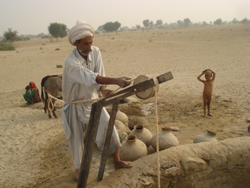 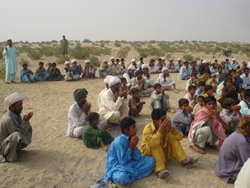 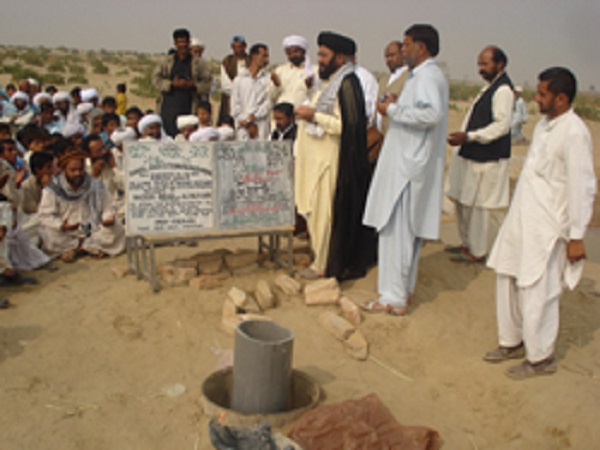 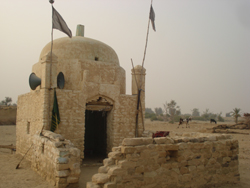 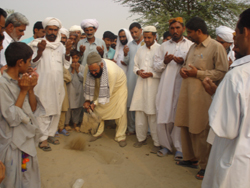 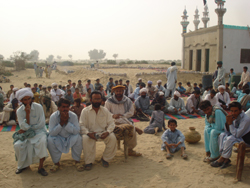 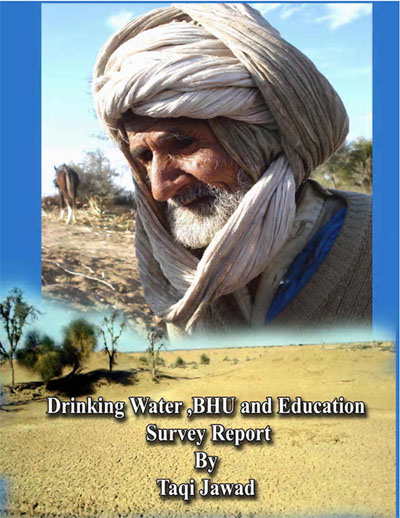 I would like to express my gratitude to all those who gave me the possibility to complete this Study. I want to thank the Honourable Syed Iftikhar Hussain Chairman Al-Noor Trust who facilitate us and provide us the all necessities of the study. I have furthermore to thank the Mr.Abdul-Rauf Abidi who stands side by side with us in all the difficulties of the survey, Boarding and Lodging was very excellent due to the Mr. Ghazanfar Langah at the D.G Khan our Base Camp. I am bound to the Mr.Wazir Ali, Mr. Zeeshan Gilani, Mr. Ghulam Punjtan. Mr Atta Hussain, for their stimulating support.

I am deeply indebted to my fellow Mr Rauf whose help, stimulating suggestions and encouragement helped me in all the time of survey for and writing of this report. My colleagues from the BDF Volunteers. I want to thank them for all their help, support, interest and valuable hints. Especially I am obliged to Mr. Sajid Hussain, Mr.Bari, Mr.Tabaruk. My friend Mr.Umer was of great help in difficult times. Especially, I would like to give my special thanks to Mr.Musharraf Niaz whose support and love enabled me to complete this work.

This report will enhance the situation of targeted area and condition of the lives of that area in your mind. The focus points which are studied are Drinking Water, Health, and Education.

Water is inevitable for life. It is one of the nature's precious gifts to human beings. Human beings can live without food for about two months but they cannot survive without water for more than four days. Besides direct consumption of water at homes and farms, water affects our daily life in many indirect ways and plays an important role in the processing and manufacturing of many essential commodities. Hence its storage, conservation and use should be in such a way that it benefits all in an equitable and efficient manner. Like many other mountainous areas of Pakistan, these considerations are particularly relevant to Rajan Pur district. But the lives of our study areas about 50 Sq Km, facing the vulnerable situation regarding the Drinking water. They fetch the water from the 300 feet deep wells by the donkeys. An average family required 6 to 8 hours to bring and fetch water from the 10km to 12 km away from their homes. Water quality is very poor and contaminated by the different harmful metals and materials. The availability of safe drinking water was 0%

According to 2002 Economic Survey of United Nations, “ Most of the inhabitants of Pakistan are poor and 40% of them live under poverty line, about 70% of its population dwells in villages. About 300,000, young ones are jobless. They have no access to good education ” . The report shows that how much difficulties and troubles have been faced by this poor and suppressed class of the country. Their main occupation is agriculture and its yearly out put cannot meet their daily and basic needs of life. It is worth to note that only 1% landlords hold almost 95% of lands in Pakistan. This unjust division of land further

creates economical problems not only for the poor but also the government does not get the lion ’ s share in this respect. In our study area we found only three schools of primary level. The education rate is 4.8.% in order to 1.7 % at Three class level,1.5% at Fifth level, 0.9% at 8 th class level and 0.7% at Matriculation level. A parent says, if their child goes to schools for education who will be the substitute as the water carrier.

Children in Pakistan face a variety of serious challenges ranging from malnutrition and poor access to education and health facilities. One in ten children does not survive their fifth birthday with the majority of deaths due to diarrhea, pneumonia or vaccine- preventable diseases. Thirty per cent of children are chronically malnourished and lack safe water and household sanitation, especially in rural areas. In our study area health facility was 0%.The 70% peoples were suffering stomach diseases and 20 % were suffering cough and fever.5% are permanent patient

Rajanpur is a city and the headquarters of the Rajanpur District and tehsil in the extreme southwest part of Punjab, Pakistan (29:06N, 70:19E). The district lies entirely west of the Indus River (Sindhu river); it is a narrow, 20 to 40 miles wide strip of land sandwiched between the Indus river on the east and the Sulaiman range of hills and mountains on the west. The town is approximately nine miles from the right (west) bank of the river. According to the 1998 census of Pakistan it had a population of 42,986

Rajanpur district has three tehsils; Jampur in the north, Rajanpur in the center and Rojhan in the south. In addition, there is a "tribal area" in the hills of Sulaiman range. Asni, Dajal, Fazilpur, Harand, Hajipur, Jampur, Lalgarh, Mithankot, Muhammedpur, Rajanpur, Rojhan, and Umerkot are the large or historic towns and cities in the district.

The study area was in Tehsil Jampur the very ignored and backward. The study themes were Drinking water and basic Health facility and Education. We moved toward the North of the Dajal. The area was symbol of the water scarcity and poverty. No water was available the water storage pond was empty. All the community depends on the rain water for their requirements .Peoples have the livestock. The average family the 10 to 12 persons. In these situations Al-Noor welfare trust installed there some water turbines which turned the situation of the beneficiaries .Now trust planned to wide their work and want to target more areas. The plan was to install 26 turbine.

In our study area only three schools was present but no one was running. Teachers were not present there and school building was locked and damage. Animals were roaming in school premises.

Study Method was survey. A team of the 12 members move across the area and filled the questionnaire from peoples. It was the multiple indicator type survey.

Children as Water Carrier It was Moza Leek wala. I asked to person why you not send your child to school for the studies. He replies that if he send his children to school than who took the responsibility of water fetching. His 3 children go to the well early in the morning to bring water. They came back at noon.

Old woman aged 70 year was at bed. Our doctor examined her and tell that she was patient of Appendix pain. Due to no proper care and treatment appendix had burst. Poison had infected all her abdomen .

Field was barren. Agriculture of this area is dependent on the rain water. Due to no rain the fields were barren. It was the Rod Kohi Area.

The most strange thing for our team was that in our study area the price of land was 500/ per kanal but the price of a donkey was 7000/- Donkey was valuable for the community because it was the helper in the transportation of water.